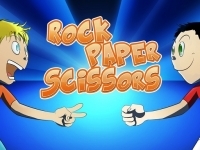 89%
Instructions
How to Play?

Do you know what’s more memorable than the classic game of Rock, Paper, Scissors? Well, it’s a game of Rock, Paper, Scissors against a terrific artificial intelligence that's able to be absolutely random while also representing a real challenge! Are you fed up with playing against people who can pre Play Rock Paper Scissors online at friv-3000.com. You can play it in fullscreen to have fun with it. Rock Paper Scissors is a great Friv 3000 game to play with no cost.

Use Left Mouse button to Interact,